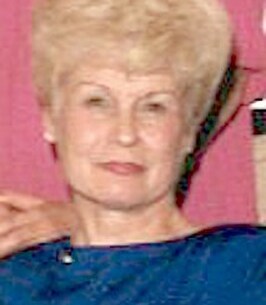 Graveside services for Bettie Katherine McCrary were held at 2 p.m. Monday, February 8, in the Luling Cemetery, with Rev. Leroy Pennington officiating. She died Thursday, February 4, at her home in Luling, following an extended illness.

“Muddie” as she was affectionately known by her grandchildren, great grandchildren, and a number of friends, was born in Gonzales County, Texas on July 10, 1935, to Walter George Weber and Maud Lena Ivy Weber. She attended Dowdy School until it was consolidated with the Seguin ISD; then attended Prairie Lea High School. She participated in a number of activities, including playing on the basketball teams at both schools. It was at PLHS that she met the love of her life, Afton Wayne ‘Papa’ McCrary, Sr. The couple was married August 30, 1952, in the First Christian Church in Luling.

The young family lived in various areas of the state where Papa worked in the oil industry. During those early years, Muddie held a number of jobs, she was a checker in a grocery store, she worked as a matron and meter maid for the Beeville Police Department, she was an aid for the Luling ISD - working as a P.E. assistant at Shanklin Elementary, and as a Library assistant at the Junior High/Senior High Library. She and Papa co-owned AWM Oil Tools with their eldest son (A.W.), and she worked for the company as a receptionist/clerk for a number of years.

She was a member of First Baptist Church. She was a talented singer, and loved sharing this gift with her grandchildren and, over the years, in various church choirs. She also sang with the Melody Maids at PLHS.
She is survived by her sons, A.W. McCrary, Jr. and wife, Kathy, of Luling, and Johnny R. McCrary and wife, Darla, of Belmont; her daughters, Karen McCrary of Luling, Vickie Walker and husband, Dan, of Burns, Kansas, and Bonnie Phillips, and husband James, of Kingsbury; her sister-in-law, Deltha Weber, of Luling; and her grandchildren, MacKenzie Walker (Shara) of Nevada, TX, Katherine Ewton (John) of Minnesota, Courtney Davis (Patrick) of Lockhart, Leslie Young (Cory) of Missouri, Sarah Mercer (Kraig) of Luling, Amanda Wiebe (Curtis) of Kansas, Stoney McCrary (Katie) of Pflugerville, Walter Ryon McCrary (Lauren) of San Angelo, Michael Hernandez (Rachel) of Seguin, and Tracy Walker (Joe) of Austin.
She is also survied by her great grandchildren, Eden, Annie, Samuel and Wyatt Ewton, Andrew and Anna Davis, C.T. Young, Anthony Paul McCrary, Lawson, Rose, Georgia and Lila Wiebe, Sadie and Colt McCrary, and Miriah, Michael Jr., Jesse and Jay Hernandez; and numerous nieces and nephews, great nieces and nephews, and great, great nieces and nephews.

She was preceded in death by her loving husband in 2014, her parents, her sisters - Lela Wood, Ella O’Neal, Evelyn Ivey, and Belle Borrer; and her brothers, Walter C. Weber, Milton Weber, Adolph Weber, John Will Weber, and Cleveland Clifton ‘Bubba’ Weber.

“Due to current CDC, State and local mandates, protective measures regarding social distancing, limited attendance capacity, and use of personal protective masks will be required for the visitation, chapel service and graveside burial rite. Services are under the care and direction of O'Bannon Funeral Home”