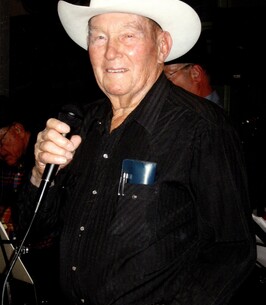 Harold was born in Guadalupe County on the Fulsher Place on January 27, 1932 to Levi Watts and Addie Lee Smith. He graduated from Dowdy High School in 1949 and Southwest Texas State Teachers College in 1958. He proudly served in the U.S. Army in Killeen during the Korean War. He married his sweetheart, Sandra Jones, on April 4, 1959.

Harold retired from Prudential Insurance in Houston in 1971 and moved his family to Kingsbury, Texas. He held several positions at the City of Luling including HUD Director, City Budget Director, and City Manager.

Some of his passions included gardening, golfing, and quail hunting. He found country music on the opry stage in retirement. He and Sandra spent more than half of their evenings in opries and jam sessions in Floresville, Seguin, Woodville, Harwood, Tillman, Lockhart, and Kingsbury. He even recorded a song at the Ryman Theater in Nashville, Tennessee in 2004.

His volunteer hours were many, serving as Treasurer of the United Methodist Church in Kingsbury, member of the Cemetery Board in both Luling and Kingsbury, Board member of the Oil Museum, and Director of the Kingsbury Opry.

He is also survived by a brother, Morgan Watts, and a sister, Patsy Olive. He is proceeded in death by his parents, a brother, Jack Watts, and three sisters, Coila Alexander, Agnes Collyar, and Nelda Wells.

Visitation will be Monday, December 28, 2020 from 5pm – 7pm at O’Bannon Funeral Home in Luling, Texas. Graveside only service will be on Tuesday, December 29, 2020 at 3pm at the Kingsbury Cemetery in Kingsbury, Texas.

In lieu of flowers, gifts may be given to the Luling Oil Museum or First United Methodist Church in Kingsbury, P.O. Box 34, Kingsbury, TX 78638.

“Due to current CDC, State and local mandates, protective measures regarding social distancing, limited attendance capacity, and use of personal protective masks will be required for the visitation, chapel service and graveside burial rite. Services are under the care and direction of O'Bannon Funeral Home.”