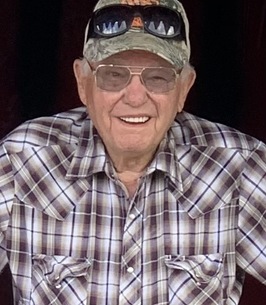 James Mace Jr., age 83 of Luling passed away the morning of Friday March 5, 2021. He was born to James Mace Sr and Maxine “Dink” Lebow in Henderson Texas in 1937. He attended Luling Schools and found his love, Pennie Garner. They were married for 59 years before her death in 2018. James served in the Army National Guard for a number of years with a bunch of his buddies from Luling which gave him many humorous memories that he talked about often. He worked for the city of Austin Water Department for over 30 years. And enjoyed helping friends with their water issues. He had several adoring nick names Shug, Boog, Pawpaw, and James Marion.

He loved family and family gatherings, sharing time with others, taking his wife Pennie to Coushatta to Gamble. James was definitely a very social person. But he did like his quiet time after everyone left watching Jag and Walker Texas Ranger while sitting in his recliner eating pork skins and drinking Miller Lite. He mowed often and could be seen talking to himself as he rode his mower trying to solve the world’s problems. He was a jokester and could usually take a joke jab back. He will be missed not sitting on his porch swing watching for deer to come to his corn feeder while dipping his Garrett snuff, drinking a cold Miller Lite and us honking two times at him as we leave his house for a visit and him telling me “you know what to do when you get home” holding up a “phone” to his ear. RIP Pawpaw.

James is preceded in death by his parents, his wife and a granddaughter. Survivors include his two children Trey Mace (Jamie) of Luling, Kristie Everton (Richard) of Austin; his sister Gayann Brown of Luling; 5 grandchildren and 13 great grandchildren; 3 nephews and numerous cousins and other family members and many, many friends.

A memorial is planned for 2:00 PM on April 17, 2021 at O’Bannon Funeral Home with Rev. Jimmy Lammers officiating.

“Due to current CDC, State and local mandates, protective measures regarding social distancing, limited attendance capacity, and use of personal protective masks will be required for the visitation, chapel service and graveside burial rite. " Services are under the care and direction of O'BannonFuneral Home”