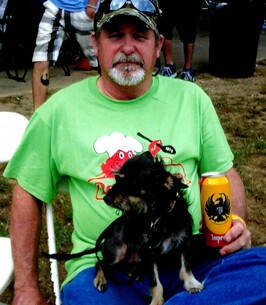 James M. Mace 111 ( Trey) passed away suddenly with his family and friends by his bedside on Thursday, July 22, 2021 at 7:20pm. James was born on June, 20, 1960 in Luling to Pennie Garrett Mace and James M. Mace Jr. in Luling Texas.He lived in Luling his whole life with the exception of a few years living in Lockhart, and Austin. He graduated from Luling High School in 1979. He married Jamie Collins on August, 16, 1980 at the First Baptist Church in Luling. At the time of his death they had been married almost 41 years.

He greatly Loved his family and friends. There was never a time he would turn you down if you needed help with something, He has literally walked through the Magic Kingdom at Walt Disney World or a sidewalk in Mexico helping his crew by phone find a valve or cutoff in order to get a water leak fixed. He worked for the City of Luling almost 41 years. His greatest joys were his Children and Grandchildren.He Loved riding his golfcart at the coast, and around town hoping to not get caught, but always carrying a golfclub and golfball just in Case.He looked forward to the Watermelon Thump every year always trying to see if he could figure out how to make setup and tear down go faster. He loved going to try out New Breweries, Port Aransas Texas, Octoberfest any where they held one, Swampfest for Crawfish, Lazy Weekends swimming at our friends house, being with his grandchildren, Going on Cruises, Flying to Mexico, Going to festivals, Gambling in casinos in Mexico, Texas, Louisiana, Oklahoma and Las Vegas.

He Leaves behind to Cherish his Memory his wife Jamie, Daughter Kori ( Jake) Son Matthew ( Seysha) his sister Kristie Everton ( Richard) He was Poppie to 6 Grandchildren Caden, Ashton, Karli, Case, Axle, and Everly. His Aunt Gay Ann Brown, Uncle Pat Garrett, Brother in Laws Steve and Michael Collins, Nieces, Nephews, Cousins and 4 very dear friends. And his beloved dog Dodger. He was preceded in Death by his parents, Grandparents, In Laws, Niece, and Brother in law. He packed a lot of life into his 61 years, and he will forever be missed by those who loved him so much.

Memorial Service for James will be held Saturday, August, 21,2021 at The Watermelon Thump Pavilion at 10:30am.