To share your memory on the wall of Ben Twidwell, sign in using one of the following options:

Print
Autobiography of Ben B. Twidwell

On February 15, 1940, at Seton Hospital in Austin, I made my appearance into the world. The proud parents were Mr. and Mrs Lindsey Homer Twidwell of Henly, Texas. I was the first, and only, child born t... Read More
Autobiography of Ben B. Twidwell

On February 15, 1940, at Seton Hospital in Austin, I made my appearance into the world. The proud parents were Mr. and Mrs Lindsey Homer Twidwell of Henly, Texas. I was the first, and only, child born to my mother, Minnie Beauchamp Twidwell.
An interesting fact in the genealogy of my family is that my only brother and I are both half-brothers and first cousins. It may be confusing, but my older brother, Homer Otto Twidwell, was born to my father and Mattie Beauchamp Twidwell, who was my mother's twin sister, on March 6, 1933. Mattie died shortly after Otto was born, and my father married her twin sister who was to become my mother.
We went home from the hospital to a ranch west of Austin in Henly, Texas, where both of my parents lived until my mother passed away in 1980. My father's vocation was that of a rancher, raising cattle, sheep, goats, hogs, and turkeys. It was from my father that my first jobs were obtained, feeding prize sheep, and raising turkeys for show purposes at livestock expositions.
My education began in elementary school in Johnson City, Texas where my mother was a teacher. I participated in the band, Future Farmers of America, football, track, and softball activities. I was captain of our football team and held numerous offices in the FFA, including that of President. I obtained the Lone Star Farmer degree, the highest in the state. I graduated from Johnson City High School in 1958.
The next step in my education was my attendance at Southwest Texas State College, in San Marcos, Texas. Here I majored in Agriculture, while working toward a minor in religion.
During my second year of college I joined the Texas National Guard. I was sent to basic training at Fort Knox, Kentucky. From there I went to Fort Sill, Oklahoma for artillery training.
In September of 1960, I had completed my active duty and returned to college, staying in the National Guard at San Marcos. It was through this unit that in 1963 I heard of the tech job I would hold, Battery 4th Battalion 132nd Artillery, Terrell, Texas. In order to obtain that job, I withdrew from college to attend Nike Universal Electronics Maintenance Course at Fort Bliss. This seemed more in accord with my interests than my college work.
In December of 1963 I moved to Terrell, Texas and worked as a Firing Panel Operator. In 1965 I received a promotion to Sgt E-5 and the tech rating of Section Chief, later advancing to Electronics Material Chief.In 1967 I was promoted to Sergeant First Class.
In 1964 I was married to Sara McMahan of Lockhart, Texas. We had become acquainted at college where she was preparing to be a teacher.
IN 1967 we moved to Luling, Texas and I worked as the Admistrative and Supply Technician with the Texas National Guard until my retirement in 1983. I had been doing so many different jobs at the Armory, that it took 9 people to fill my one position!
After retirement, I concentrated on my cattle ranching in the Luling area. Agriculture continued to play a large role in my life, including my service on the Plum Creek Water Board. I also had various rental properties in Luling, including an RV park. I enjoyed hunting and fishing and visiting with my friends and family. I was also involved in many aspects of the community, including the Watermelon Thump and City Council.

On January 13th, Ben was admitted to CTMC hospital in San Marcos. His health had been declining for some time. Ben Beauchamp Twidwell passed away on January 23, 2020 in the care of CTMC Hospice.
Ben is preceded in death by his parents Lindsey and Minnie Twidwell,and his brother Otto Twidwell and wife Shirley. He is survived by his of wife of 55 years, Sara, his niece and her husband Lea Twidwell and Myron Yoshioka, brother-in-law Lee Kitchens, nephew Craig Kitchens and wife Carol and many wonderful cousins. A visitation will be held at O'Bannon Funeral Home in Luling Texas on Monday January 27th from 4 to 6pm. There will be a graveside service at the Miller Creek Cemetery outside of Johnson City Texas on Tuesday January 28th, 2020,at 2pm, where Ben will be laid to rest alongside his parents and brother and sister-in-law.
In lieu of flowers, please consider donations to the First United Methodist Church in Luling, the Luling Animal Welfare Society (LAWS), or the CTMC Hospice at 1315 IH 35N, San Marcos, Texas 78666.
Read Less

To send flowers to the family or plant a tree in memory of Ben Beauchamp Twidwell, please visit our Heartfelt Sympathies Store.

Receive notifications about information and event scheduling for Ben

We encourage you to share your most beloved memories of Ben here, so that the family and other loved ones can always see it. You can upload cherished photographs, or share your favorite stories, and can even comment on those shared by others.

Posted Jan 26, 2020 at 04:33pm
Ben and I went to school together. We played in the band and competed for first chair always. His mother was my second grad teacher. I will miss him.
Comment Share
Share via: 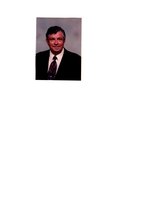