To share your memory on the wall of Horace Reece, sign in using one of the following options:

Print
Horace Stanley “Stan” Reece, 99, of Luling passed away Thursday, October 30 in San Antonio. He was born September 22, 1921, the oldest of five children, in Martins Mill, Texas to Flake Elijah and Nettie Mae Reece. He graduated from Athens High ... Read More
Horace Stanley “Stan” Reece, 99, of Luling passed away Thursday, October 30 in San Antonio. He was born September 22, 1921, the oldest of five children, in Martins Mill, Texas to Flake Elijah and Nettie Mae Reece. He graduated from Athens High School in 1940 and like all children of the Depression he worked a number of jobs -- including construction and as a mechanic in his father’s garage. He joined the Army Air Force in 1942 as an Aviation Cadet and went through flight school in Brady, Waco and Eagle Pass Army Airfields. Finishing at the top of his class 2nd Lieutenant Reece received his wings and was assigned as an instructor pilot. Despite numerous attempts to be assigned overseas as a fighter pilot he remained in Texas throughout World War II.
In 1945, following a 15 month stretch in the hospital, he met and married Edith Clark, an Army officer and nurse. He and Edith remained married for 66 years until her death in 2011. They had two children, Ralph and Jacque.
Stan remained in the Army, and then the Air Force for over 32 years. He served as part of the occupation force in Germany from 1946 through 1949, where he and his brother Chuck flew in the Berlin Airlift. After a return to the US he was sent to Korea during the Korean War where he flew as a Forward Air Controller directing field artillery and close air support. From 1953 thru 1958 he flew a variety of piston and jet powered aircraft, before being assigned to Misawa, Japan to fly the F100 in the 531st Tactical Fighter Squadron which he ultimately commanded.
Returning to Florida in 1962 as a Lieutenant Colonel he became part of the fledging Air Commando Command working to define air support for Special Forces (SF) operations. In 1964 he was assigned to Germany to command the newly formed 7th Air Commando Squadron supporting Special Forces in eastern Europe. They practiced insertions and extractions of SF teams, provided air support for British SAS commandos, and conducted parachute drops all over Europe.
From Germany he and Edith were stationed in England where he commanded the 492nd Tactical Fighter Squadron, another F100 unit, from 1966 to 1968. The squadron conducted operation in England, Italy, Libya, Turkey, and Scandinavia. From there, dropping Edith back in Texas he went to Viet Nam for his third war. At Phu Cat he was again flying the F100 in close air support for Army ground forces. When he was promoted to Colonel, he served on the 7th Air Force staff in Saigon.
Coming home in 1969 he finished his service in the USAF as the senior advisor to the Adjutant General of Missouri in St. Louis. When he retired in 1974, he and Edith moved to Luling where he started his next career as a small rancher and continued a life of service. He served on the Luling School Board for 24 years and as its president for nineteen. He was active in the Luling Kiwanis Club, helping to manage the Matthews – Reece Ranch. Stan served on the Board of the Foundation Farm and on the Caldwell County Agent Supervisory Board for many years. He was a member of the County Farm Bureau Board and served as its president. In November 2011 he was recognized for his long service to the Texas Farm Bureau with the prestigious Pioneer Award.
In 2014 Stan, at the age of 92, married Madeleine Manford and they shared the rest of their lives together. Madeleine passed away on 18 October and Stan followed a few days later. He led a full and exciting life dedicated to the service of his country, his county and his city. He exemplified the Greatest Generation.
He is survived by his son Ralph Reece (Barbara) and daughter Jacque McMahon, his sister Mary Jo George, five grand-children, 10 great grand-children, and numerous nieces and nephews.
A visitation will be held at O’Bannon Funeral Home in Luling from 5PM to 7PM on November 6th. A graveside service will be conducted at the Prairie Lea Masonic Cemetery on November 7th at 11 AM. Memorials in lieu of flowers may be made to the Luling Foundation Farm or the Luling Kiwanis Club.
Read Less

To send flowers to the family or plant a tree in memory of Horace Stan Reece, please visit our Heartfelt Sympathies Store.

Receive notifications about information and event scheduling for Horace

We encourage you to share your most beloved memories of Horace here, so that the family and other loved ones can always see it. You can upload cherished photographs, or share your favorite stories, and can even comment on those shared by others.

Flowers were purchased for the family of Horace Reece. Send Flowers 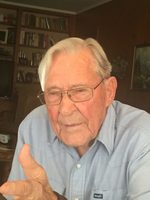